Doing the same thing over and over again and expecting different results is insanity.
- Albert Einstein

Mr. Anthierens is the Coach Logistics and Continuous Improvement Processes at Atlas Copco Airpower NV, Industrial Air Division in Wilrijk, Belgium. This makes him the second Certified Champiion in Lean for Belgium. 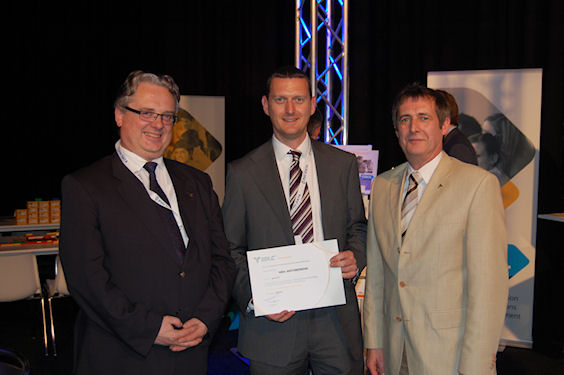 This thanks to our new exam centre: PMI Production Management Institute GmbH in Planegg (Munich) Germany.

Please check out the details of the new exam centre at our exam/education centre page of the site.

IIBLC® is moving to new location

After 5 years of operation in Deurne, IIBLC® is moving to a new location!
As from April 2nd 2013, our office will be situated in the "Bedrijvencentrum Concentra" in Antwerp.

The four-letter abbreviations "CGBL", "CBBL" and "CChL" are now registered trademarks. This adds to their value as only people who are authorized by IIBLC® can use them.

As mentioned on our certificates: people who obtained the certificate are allowed to use the four-letter abbreviations (e.g. on CV, as title behind name, ...). all others need prior approval from IIBLC®. Failing to do so is ground for legal action.

Learn to Manage Continuous Improvement Without Leaving Your Desk!

On Aug. 6th, the first CChL Certified Champion in Lean certificate has been awarded to Mr. Guy Van Herzele.

This makes him the first CChL in Belgium!
Congratulations!

The Book Of Knowledge (BOK) version June 2012 is now available for sale via our exam centres.

It replaces all previous versions and, as from now, is only available in hard copy.

Contact your nearest exam centre (details here) to get your copy!!

On May 24th, you might have encountered problems when trying to reach our site. This was due to a problem on the hostserver side. These problems should be resolved now. Our apologies for any inconvenience!

During the March 17th exam, Mr. Antonio AMARO, from Portugal, obtained the CGBL Certified Green Belt in Lean certificate. He passed his exam in Madrid via the Centro Español de Logística (CEL).

This makes him the first Lean certified candidate in Portugal. Congratulations!

As the economy continues to heal, post-recession demand for continuous improvement talent persists strongly, according to the latest study of almost 7,100 recent Internet job postings reviewed by The Avery Point Group. The executive search firm's eighth annual study found that the combined demand for Lean and Six Sigma talent has more than doubled, rising more than 103 percent over 2010 recessionary levels and 6 percent ahead of last year's strong talent demand levels.

"This year's study clearly illustrated there is strong ongoing demand for continuous improvement skills ahead of the broader economic recovery," states Tim Noble, managing principal and partner of The Avery Point Group. "However, within that ongoing surge for continuous improvement talent we are beginning to see a very clear and accelerated trend in the demand for Lean skills versus Six Sigma that may also indicate a decoupling of the two initiatives in relation to job requirements."

Based on this year's study, The Avery Point Group found that demand for Lean talent has accelerated at its fastest year-over-year pace in the eight-year history of the study as the more desired skill set over Six Sigma. This year's study showed that Lean talent demand now exceeds Six Sigma by almost 68 percent, almost doubling its lead over last year's results that only showed a 35 percent edge for Lean over Six Sigma.

Overall, the continued rise in talent demand for Lean bodes well for candidates who possess those skills, as organizations seek them out as either a hedge against current economic uncertainty or as an enabler to leverage the emerging economic recovery. Thanks to the international independent certification programme of IIBLCyou can prove your present or future company and others that you master the necessary knowledge and skills in Lean.